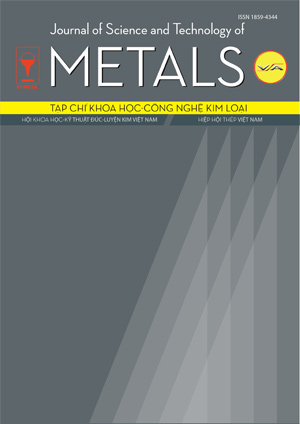 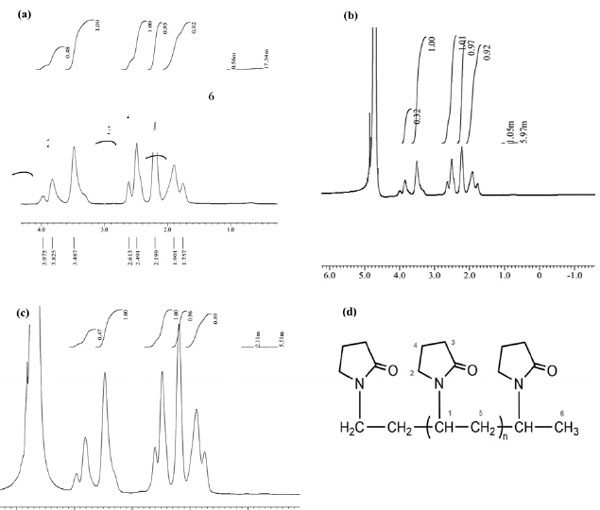 Polymer quenchants are becoming more and more popular as substitutes for traditional quenching media in heat treatment. Especially, water-soluble organic polymer offers several environmental, economic, and technical advantages, as well as eliminates the quench-oil fire hazard. Furthermore, the cooling characteristics of polymer quenchant are influenced by concentration, agitation, temperature, degradation, contamination and drag-out. In the present study, the influence of temperature on the ageing of aqueous polyvinyl pyrrolidone (PVP) was evaluated regarding cooling curves, kinematic viscosity, molecular weight. The cooling curves were determined by the ISO 9950:1995 standard, the molecular weight of PVP was calculated based on nuclear magnetic resonance (NMR) spectroscopy. The results showed that after 30, 60, 150 and 200 quenching cycles, the viscosity of the polymer PVP solution decreases by about 2, 5, 17 and 30 %, respectively. The observed NMR spectrums indicated that the polymer chains were shorter and the molecular weight of the PVP was decreased after many cycles of quenching.

The use of aqueous polymer quenchants is increasing in heat-treating industries for quenching of aluminum alloys and steels, as substitutes for both water and oil quenchants. The polymer quenchants are prepared by dissolving the organic polymer in water. Polymer quenchants have the advantages of easy handling, better stability, and consistent cooling performance over a period of time [1]. The cooling characteristics of polymer quenchants are intermediate between water and oil, their Grossmann quench severity is in the range of 0.2-1.2 [2] The use of commercial PVP polymer as quenchant begun in 1975 [3]. PVP is non-toxic, water soluble, biologically compatible and hence it is eco-friendly [4]. PVP has similar performance compared to mineral oil, with good stability in use; its solubility in water is high, with higher drag-out than polyalkylene glycol (PAG) at the same viscosity [5].

The cooling characteristics of polymer quenchant are influenced by concentration, agitation, temperature, thermal degradation, contamination, and drag-out. Many researchers such as Z. Koudil et al., Rafika Ikkene et al. have investigated the effect of PVP concentrations, bath temperatures, agitation speeds on the cooling rate of the solution [3]. These studies showed that when the concentration of PVP decreased, the cooling rate of the solution increased. On the other hand, as the temperature of the quenching bath and the agitation speed increased, the cooling rate also increased. E. Troell et al. had reported the effect of thermal oxidation of the PAG quenchant on its cooling rate and viscosity by measuring the viscosity and cooling rate of PAG polymer quenchant after the number of quenching times [6]. The results revealed that after more times of quenching, the viscosity of the solution decreased while the cooling rate increased. George E. Totten, by using the Fourier Transform Infra-Red (FTIR) method, also noted that after some quenching cycles, the PAG polymer in the quenchant was oxidized [7]. In summary, the previous studies have shown that, due to the effect of the temperature, the chain of the polymer was heat degraded, leading to reduce the life-time of the quenchant. However, there has been no quantitative study of the change in polymer molecular weights in the quenchant under the influence of the temperature.

In this paper, the effect of thermal degradation on the lifetime of the aqueous polyvinyl pyrrolidone quenchant was investigated by evaluating the changing of cooling rate, viscosity and polymer molecular weight of the 4 % PVP quenchant after 30, 60, 150 and 200 quenching cycles. The changing of the polymer molecular weight as well as the lifetime of PVP quenchant was determined based on the measured results about the cooling rate, the viscosity and the Nuclear Magnetic Resonance spectroscopy (NMR).

In this study, the aqueous solutions which dissolved the PVP K60 polymer with a concentration of 4 wt.% was used as the polymer quenchant. The average weight of PVP K60 polymer is Mw = 280000 (g/mol) and the chemical structure of PVP polymer is shown in Fig.1 [4].

To evaluate the lifetime of the researched PVP polymer quenchant (4 %), it is necessary to measure the cooling rate of the initial solution and the solutions after 30, 60, 150 and 200 quenching cycles. The cooling rate of the PVP polymer quenchant was determined following the experimental diagram in Fig.2. The experimental system consists of a furnace equipped with a temperature controller, one standard probe was made by the Inconel 600 alloy and fabricated in accordance with ISO 9950 standard (equivalent to ASTM D6200) about structure, shape, and dimensions; two thermocouple wires were mounted in the core of probe and connected to the temperature recording device; one temperature versus time recording device (USB 4718) was connected to the computer and WaveScan software. The measurement diagram is shown in Fig. 2.

3.1.  Cooling rate  of  the  4%  PVP quenchant after several numbers of quenching cycles

The cooling rate of the 4% PVP quenchant after several numbers of quenching cycles is presented in Fig. 3. The results show that when the quenchant has been quenched many times, the maximum cooling rate (CRmax) increased and the cooling rate at 300 °C also increased.

3.2. The viscosity of the initial solution and the solution after several numbers of quenching cycles

The 1H-NMR spectrum gave the information about the types of protons, the number of each type of proton and their chemical environment, whereby it assisted to reach the important conclu- sions about the structure of the polymer. The 1H- NMR spectrum of PVP quenchant at 0 (a), 150 (b), 200 (c) quenching cycles and the proton type in PVP (d) is displayed in Fig. 6. The proton chemical shift of PVP is presented in Table 2. 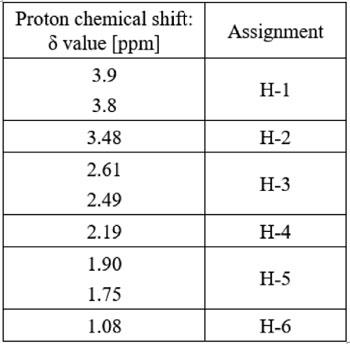 According to the reference [8], the molecular weight of polymer could be determined by following formula:

where n is the number of repeating units of PVP block which could be calculated as below:

QUOTE  n = proton H1 intensity (2) Through equation (2) we obtained the value of n. Besides, based on equation (1) and equation (2), and the 1H-NMR spectrum of the PVP poly- mer after the number of quenching cycles Fig. 6, the molecular weight of PVP polymer was calcu- lated as shown in Table 3. 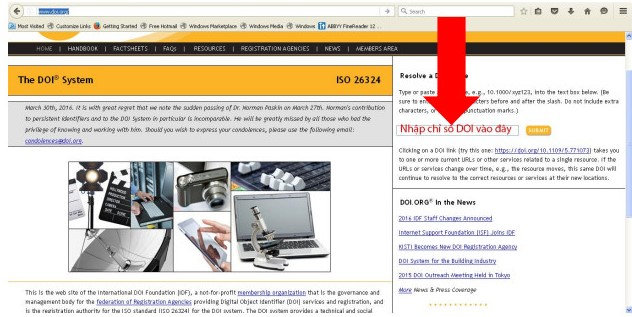